Posted on September 27, 2013 by nrpubliclibrary 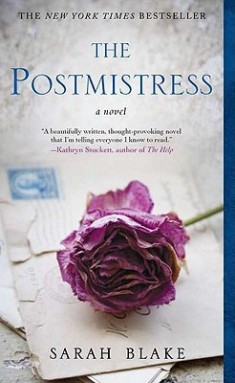 We are reading The Postmistress by, Sarah Blake we still have copies available if you would like to join us.

In 1940, Iris James is the postmistress in coastal Franklin, Massachusetts. Iris knows more about the townspeople than she will ever say, and believes her job is to deliver secrets. Yet one day she does the unthinkable: slips a letter into her pocket, reads it, and doesn’t deliver it.

Meanwhile, Frankie Bard broadcasts from overseas with Edward R. Murrow. Her dispatches beg listeners to pay heed as the Nazis bomb London nightly. Most of the townspeople of Franklin think the war can’t touch them. But both Iris and Frankie know better…

The Postmistress is a tale of two worlds-one shattered by violence, the other willfully naïve and of two women whose job is to deliver the news, yet who find themselves unable to do so. Through their eyes, and the eyes of everyday people caught in history’s tide, it examines how stories are told, and how the fact of war is borne even through everyday life.